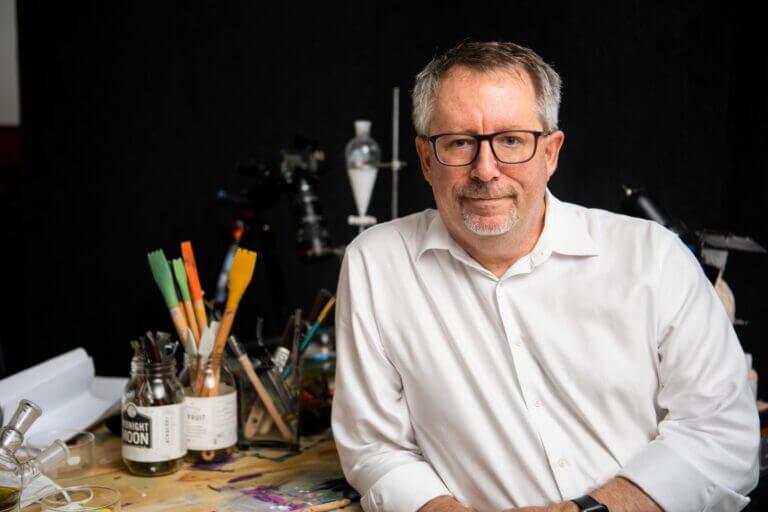 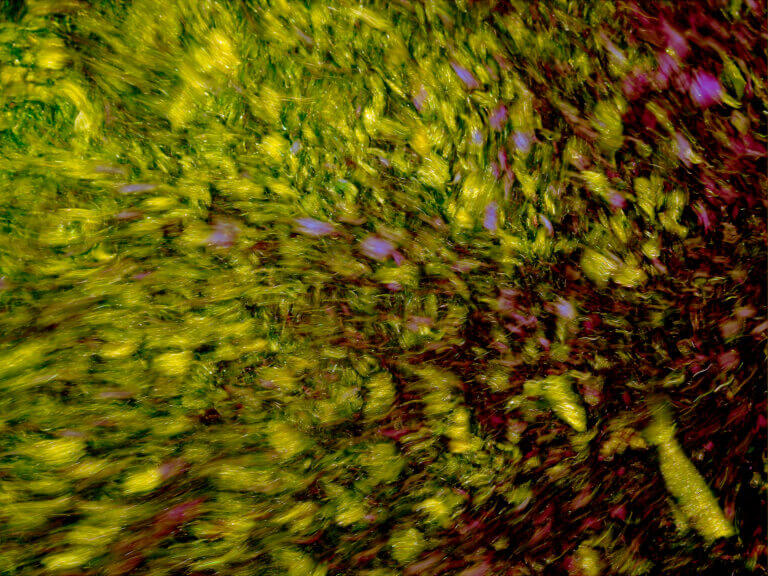 I mentioned in my last post, we were recently in France for a vacation. During that adventure we visited different galleries  including many favorites like the Louvre, Musée d’Orsay and paid close attention to the artwork in the churches, chateaus and castles. Over my life, there have been many trips to galleries and art shows. In each of these visits, my science mind was dominant.  I wanted to understand the technical aspects of how the photograph was shot, how the painting was done, how the sculpture was created etc. My bias and perspective wanted to reverse engineer the process to learn simply how did they do that?  During this trip, something different happened.  I experienced a profoundly different internal response to the artwork.  The Degas, Picasso, and so many other masters were stunning in person.  Almost overwhelming. However, there was a new unique importance to the moment.  I became very self aware that while considering and observing them it was not technical skill, use of color, depth of field, detail versus impressionistic and so on that captured me. It was not the scientist trying to reverse engineer and understand the technical merits. There was an emotional trigger and response that snagged me. I was more aware of that internal response then I could ever recall.

Among the many pieces of art we saw, The Musée d’Orsay has Starry Night Over the Rhone from 1888. I have seen many versions on posters, online, and in various prints. I turned the corner and an ample crowd was around the painting. Behind each head, shoulder and phone taking a picture, I was getting nearer.  The reveal was slow, and at time, like hockey with the shoulders, arms and backs pushing into each other.  Heads parted, shoulder moved left and right.  Five feet away in front of the distracting scalps and phones I began to visually assimilate the painting.  My heart skipped and my breathe was stolen. It was immeasurably more impactful in real life than in any other version.  You can feel each paint stroke and its considered placement.  The vibrancy of the stars, the quietude of the buildings arcing through the painting, the couple’s and boats in the foreground, and the soft ripples of the reflections in the water.  The piercing stars amid the night’s sky’s transition through its various blue hues captured my heart.  Still to this day that moment is etched in my mind.

From that emotion. we explore why I love my photography.   For that conversation we chose to dig in with feux d’artifice de astrominae #1.  I originally saw fireworks in the image.  The photographs were conceived from a simple but powerful technique.  Gentle motion of various colors within a liquid inside a Petri dish.  Varying the hand movements allowed for the patterns to evolve.  Placing black paper behind the dish allow us to see movement, energy and color surfacing from the depths of a void.  My technical scientist minds prevails and would continue down that known path and habit.  Instead, I enlisted the help of Stephen Kristian, a fantastic writer, to facilitate the exploration of a much more important aspect of my photographic art.  What is the creative emotion, mood and sparks that happen within me and this audience around the art.  Stephen and I are working through a process to help open a dialogue through these blogs and hopefully a YouTube channel.  More on that later.

It may be a stretch to connect a photograph and a impressionistic painting.  Perhaps opening our thoughts to a new paradigm might help.   Recently, while on a trip to France, my wife and I were driving randomly in the Loire valley and simply allowing the springtime season to wash over us.  Fields of wheat, golden yellow, covered the fields with breezes moving them in a simultaneous synchronous and asynchronous dance. We stopped and I got out and sat quietly close to the edge of a field.  The breezes pushed and pulled the wheat is no many directions: up, down, right, left, towards and away from me.  Various angles and arcs appeared and evanescently disappear. Some moved more than others and a few stayed so still  perhaps stoically within the turmoil.  Various aromas ebbed and flowed from the field of yellow and green.    Stephen observed that this photo could be considered with a perspective that was less fireworks and more wheat and flowers in the breeze. 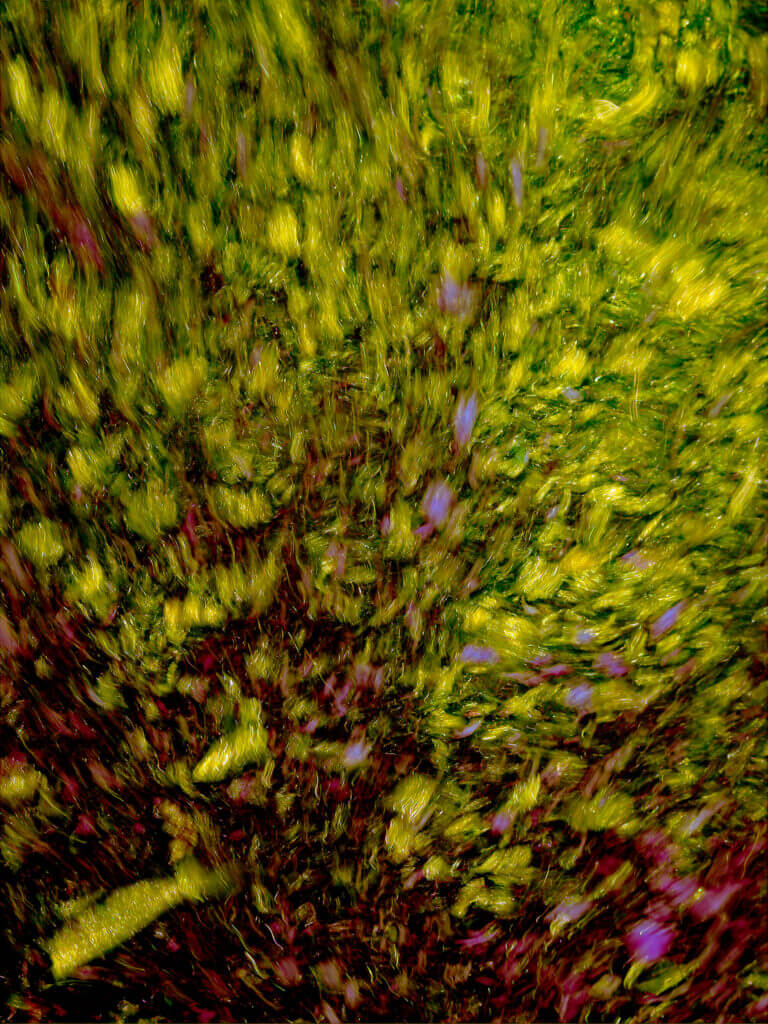 We moved to explore the energy in the wheat fields and the energy in the Petri dish.  We pressed deeper.  What fascinated us was the movement, energy and patterns are emphasized AND attenuated depending on the perspective.  In the top photo orientation there are bright yellows and greens moving towards the top and upper left corner.  Hints of periwinkle hide in plain sight and can be found by simply settling for a moment and considering the specific loci within the art.  In the bottom right corner opposite from the color and motion there is a distinct negative space.  That area has vibe with deeper colors.  Reds, pinks and a substantial amount of a black void.   Then there is a faster, but less intensely lit area of yellows moving the the left akin to a fast moving school of fish. We inadvertently rotated the photograph 90 degrees clockwise and the photo changes dramatically.  A more earthen botanical sensibility appears to the eye.  Roots and branches can be imagined grounded in the earth and leaves gently yielding to the whim of the winds.  Feathered birds and peacocks enter our imagination, if we allow ourselves to simply be still within the moment and movement.

In our discussion, we also covered just the overall vibe and energy.  This is the energetic, vibrancy to the work of art.  There is optimism, life and an effusion of positivity arising from the black for the mind and eye to consume.

We began to explore what music would pair well or simply be evoked while we viewed the art.  This idea of a mash up of Monet’s brilliant floral works and Pink Floyd’s Obscured by the Clouds cover art come to mind for Stephen.  The music that comes through when I look at this photo is one of the deeper tracks about 14:30 into Shine on You Crazy Diamond David Gilmour takes over from Rick Wright on solo.  The energy in the song moves quickly to a new fevered pitch and intensity.  The guitar licks move in a manner that reminds me of the patterns in this art and the wheat field.  Move to that place and imagine the series of photographs streaming on your television or monitor and evolving with the music.  Near perfection…

Lastly, the web images do not do the print justice.  To hold the paper and feel the thickness of the Moab rag paper brings this to a new dimension and brings it even closer to a world of impressionistic painting.  I look forward to our conversations around paper choices and decisions about mounting and framing in future sessions.  This is not a somber still life photograph.  This fleeting fragment of time cannot be recreated.  It is truly living in the moment photography.   The series is a finite selection of curated photos that I think are the best results and most emotive.  I hope you enjoy the blog and my selections for discussion.  Feel free to join the thread, add to the dialogue and for the willing, we would be glad to invite the audience to join us on future sessions.